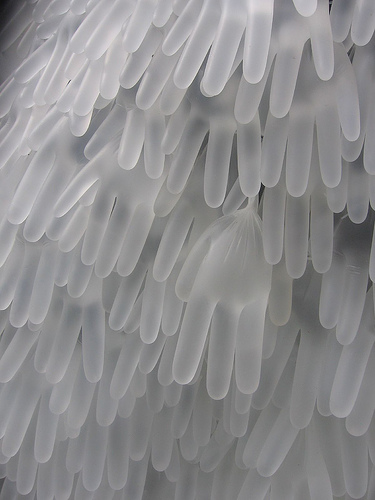 How often do surgical gloves fail? The picture (cc) is by A.Currell

Even though minor rifts in surgical gloves happen every now and then most surgeons don’t think too much about them. A study by Carter et al. indicate that we probably should be more worried: we miss to detect about 2/3  of the perforations. In 80 % of the cases we also failed to acknowledge that also the inner glove was perforated. Not surprisingly the surgeon had the highest rate of perforations, between 4-9 %, relating to procedure difficulty.It is hard to say how big an impact this actually has on the surgical site infection. It does though, warrant more frequent changes, even without any noticed perforations. I’ve long been an advocate for changing before contact with any implant and hopefully my case will be easier with this study.

I’m a little impressed by the amount of gloves: 3863 gloves used in only 94 surgierys. This gives 20 pairs of gloves per surgery!

It would also be interesting to know if the sterility actually was an issue. You could probably do this by culturing bacteria from the gloves and see if there is a correlation – by taking a culture before testing the glove with water one could have groups with double glove, single glove or no perforations and deduce how worried we should be by these perforations.

I’m a little surprised that with this enormous testing of almost 4 000 gloves they didn’t bother to ask a statistician for help. A logistic regression on this material would be awesome, easier to understand and would probably give interesting new insights.