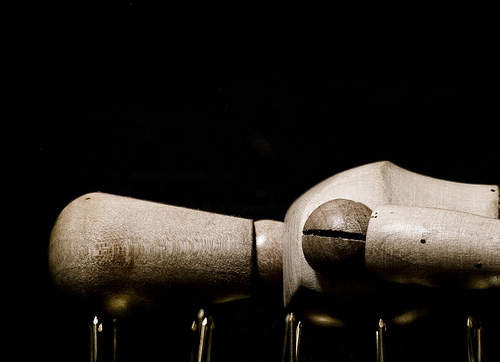 The most common symptom that an orthopaedic surgeon treats is pain, while simple in concept it turns out to be surprisingly difficult to pin down the cause. The picture is a bed of nails, CC by Ormando Madoery

Degenerative meniscal tears in the knee are a truly elusive problem for orthopaedic surgeons. As I have previously posted, degenerative meniscal tears are a common MRI finding in the healthy population above 40 years of age, and fail to correlate with actual knee symptoms, such as pain. As a surgeon it is tempting to try surgery for these injuries, but there is an increasing pile of evidence against this. This post is a comment on the most recent evidence, a NEJM study by Katz et al.

It is important to understand the difference between a degenerative meniscal tears and a traumatic one: the first can occur spontaneously or may “appear” after a minor trauma, like stepping of a bus (low load), while the second one usually is sport related where the femur grinds & twists around the tibia with the meniscus caught in between (high load). Many argue that early stages of osteoarthritis manifest as degenerative meniscal tears, Englund et al’s excellent Nature article is an interesting review of the menisci.

Katz et al. posed in their study a very simple question: will the patients get better with surgery, or should we just go with physiotherapy? They performed a multicenter study where they included patients above 45 years of age, MRI-verified medial meniscal tear, and symptoms that had not subsided within a month. After the inclusion patients were randomized to arthroscopic surgery or physiotherapy. Outcomes were patient reported scores measured at 3, 6 & 12 months after randomization.

They included 351 patients, 330 were available for analyses, and the results did not differ between the groups. The improvement for the scores (WOMAC, KOOS & SF-36) were slightly better early on but not significant.

A few things caught my eye:

I try to refer my patients as much as possible to the physiotherapist. While I try to explain to them why, I often feel that they don’t quite believe me, especially if they know someone who has done the surgery. Furthermore, some patients are willing to take the chance as they feel that they can’t wait for the physiotherapy effect to kick in. Explaining to this group the risk of rare adverse events is very tough. While Katz et al’s excellent study was a good read; I unfortunately doubt that it will change patient behavior. It is also difficult from a study like this to conclude that carefully selected individuals would not benefit from surgery.

2 thoughts on “Dealing with the degenerative meniscus – to cut or not to cut?”