The new R Markdown (rmarkdown-package) introduced in Rstudio 0.98.978 provides some neat features by combining the awesome knitr-package and the pandoc-system. The system allows for some neat simplifications of the fast-track-publishing (ftp) idea using so called formats. I’ve created a new package, the Grmd-package, with an extension to the html_document format, called the docx_document. The formatter allows an almost pain-free preparing of MS Word compatible web-pages.

In this post I’ll (1) give a tutorial on how to use the docx_document, (2) go behind the scenes of the new rmarkdown-package and RStudio ≥ 0.98.978, (3) show what problems currently exists when skipping some of the steps outlined in the tutorial.

Tutorial on how to use ftp with the rmarkdown implementation

A major improvement in the new rmarkdown is the YAML set-up. It is now much easier to set-up environments for your documents, all you need to look at is the function arguments in the documentation and provide those in the file. You have four different default document types where some options shared while other are output-specific: html_document, pdf_document, word_document, or markdown_document.

As mentioned above, the Grmd-package also contains a formatter, the docx_document format that is a wrapper around the html_document. It has the same options as the html_document with a few additions/defaults adapted to the concept of fast-track-publishing. As the package depends on rmarkdown it can currently only installed from Github (CRAN does not allow dependencies on packages outside CRAN) and in order to install the package you need to use the devtools-package:

After this you simply put at the top of your Rmd-document:

If you may notice that after adding the above change from html_document to the custom Gmisc::docx_document-format the choice knit-box intelligently changes from:

As RStudio is uncertain of how to approach this new format. Note: interestingly this also occurs if you happen to set the rstudio.mardownToHTML option using options().

For this tutorial we will use the Rmd document found in the Github ftp-repository. It is a simple example using my two main packages. Thus the new Rmd file is:

with the accompanying setup_and_munge.R script:

Will provide the following browser output: 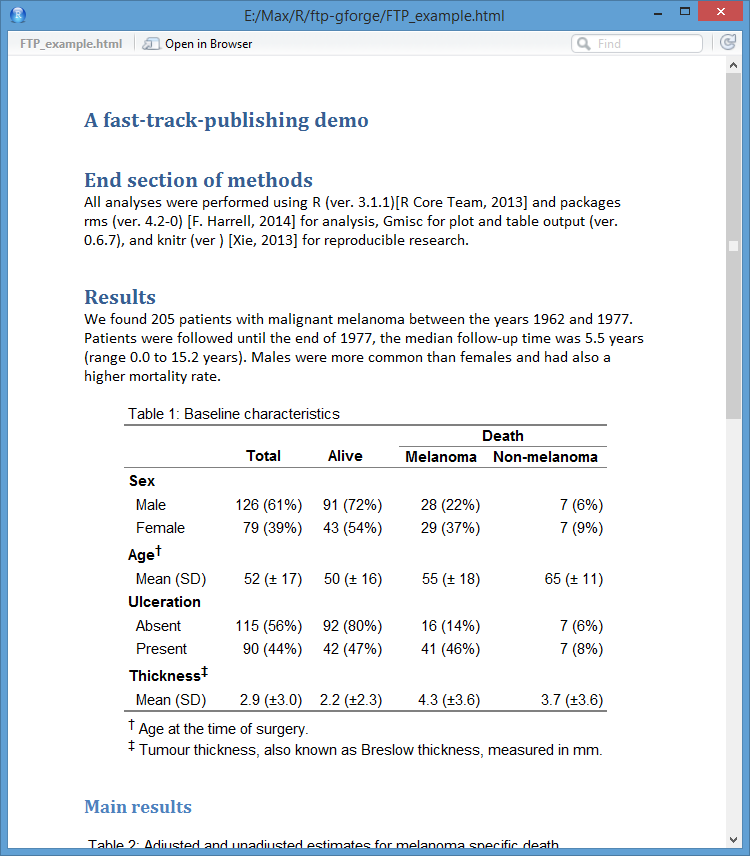 Copy-pasting directly from the web-browser works! The current compatibility that I’ve checked are (Windows 8.1):

Just choose a compatible browser from the above list, open the .html-file, select everything, copy->paste it directly into Word, and you’ll get the following beauty:

Going through LibreOffice will produce a very similar result to the above but you will additionally also have the image at the bottom (that is if you are not copy-pasting from Chrome/IE).

To open the file, navigate to it using the explorer, right click on the html-file and open it in LibreOffice as below (click on the image to enlarge): 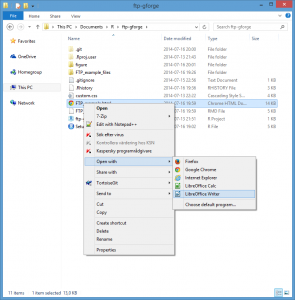 And you will get the following: 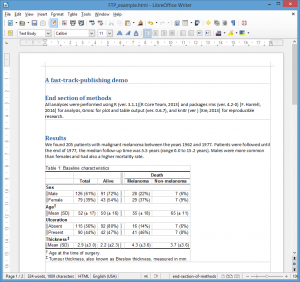 Staying here and working in LibreOffice is probably an excellent alternative but if you still want the .docx-file for MS Word then go to File > Save As.. (or press Ctrl+Shift+S) and choose the .docx format as below: 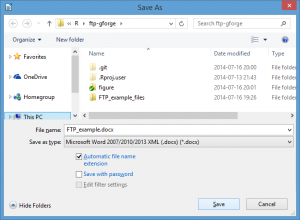 I hope you found this tutorial useful and good luck with getting your masterpiece published!

Behind the scenes with the rmarkdown-package and RStudio

The R markdown v2 took some time getting used to. One of the first changes was that the environment no longer includes the knitr-package. To access the knitr options we now have to either include the package manually or use the :: operator. E.g. when setting the knitr chunk options:

As LibreOffice ignores some of the formatting presented in the CSS the current alternative is to specify at the element-level the option through post-processing the html-document. This was actually a little tricky to figure out, the rmarkdown runs the render() function that has the option of applying a post-processor to the output. Unfortunately this can not be provided to the html_document as this has it’s own post-processor that it attaches to the output_format object. As I didn’t want to replace the default post-processor with my own, I needed to write a rather complex formatter that runs the new post-processor after the first, hence core of the docx_document() formatter does this (the actual code also does some additional cleaning):

High-resolution images (DPI ≥ 300) are frequently needed for press. As in the example you need to specify the dip=300 in the knitr-chunk. Doing this will unfortunately blow upp the image to an uncomfortable large size and it may be therefore interesting limiting the screen output size. For this you use the out.width and the out.height. Since these elements are not available in markdown knitr inserts a plain <img src=”…” /> element without captions. To remedy this you can set force_captions=true as in the example. It will use the XML package and replace <p><img …/></p> with an element identical to the pandoc image with caption (see the function that is invoked by docx_document below).

For those of you developing packages in RStudio, here are some neat functions that I currently like (not specific to the latest version):

Issues that the current solution resolves

I’ve gotten quite a lot of response to the ftp-concept, especially now that the new functionality that caused some new bugs to appear with the old ftp-approach. In this section we’ll look a little at what happens when skipping some of the steps.

I believe that this will be the future but unfortunately pandoc’s table abilities lacks the finesse that I like. In order to get reviewers quickly acquainted with the study results I think that nice tables can’t hurt. E.g. the table below is far from satisfactory in my opinion:

Importing html-documents into Word has for some unknown reason not been a priority for the Microsoft developers. I’m surprised that the import isn’t more advanced more than two decades since the web began. Currently the major problem is that you loose the table cell borders: 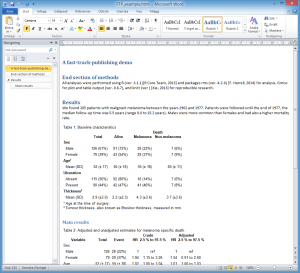 Opening in LibreOffice and copy-pasting from there

Somewhat odd that this doesn’t work. When copy-pasting from LibreOffice to Word the formatting of the headers suddenly end up with a 14pt margin below, see below image: 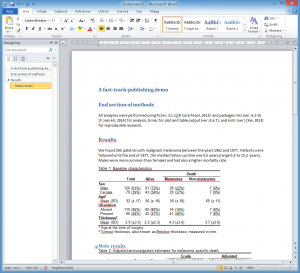 Opening in Firefox and copy-pasting into Word

As you see below, most of the formatting is lost when using this approach: 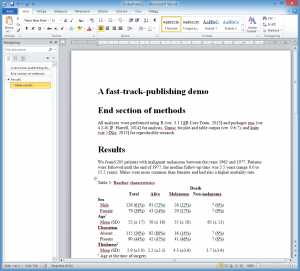 This entry was posted in R, Tutorial and tagged ftp, knitr. Bookmark the permalink.