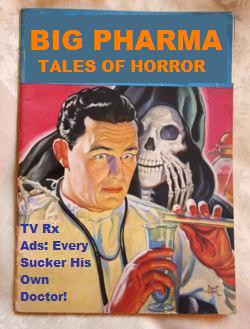 Tales of Big Pharma Horror. The image is CC from Mike Licht.

Thromboprophylaxis is a given for patients operated due to lower limb injuries, at least if we believe Big Pharma-studies. This dogma is now challenged by a double-blind, multi-center, RCT by Selby et al. They found that the DVT rate was much lower than expected and had to pull the plug on the study as it would be practically impossible to show a difference between placebo and LMWH.

The study recruited from 13 Canadian hospitals patients that were above 16 years with a lower leg fracture, excluding major trauma. The patients were randomized to either placebo or dalteparin 5000 units with evaluation using Doppler ultrasound of the proximal veins after two weeks. They also looked at symptomatic DVTs within the first three months. A statistical power analysis indicated a need for 700 patients, this was from an expected 4-5% incidence for the placebo group where the treatment would reduce to 1/4:th.

Unfortunately they only found an incidence of 2% with no larger difference between the groups and pulled the plug after 265 patients. There was one more case in the placebo group, a non-fatal pulmonary embolism, but otherwise there was no difference.

They screened almost 2000 patients and managed to include 265 patients, i.e. almost 90% were not eligible. As the largest group refused participation it does raise the question of generalizability – patients that believe they may be at risk for DVT may refuse to participate. This will complicate any clinical implementation from the results, one cannot ask ones patients “if I was to hypothetically ask you if you want to participate in a thromboprophylaxis study, would you participate?”

It is a nice study but perhaps not a study that we can act upon without additional evidence. Although understandable, it is a pity that the study was closed prematurely. It does though highlight the need for research independent of Big Pharma.