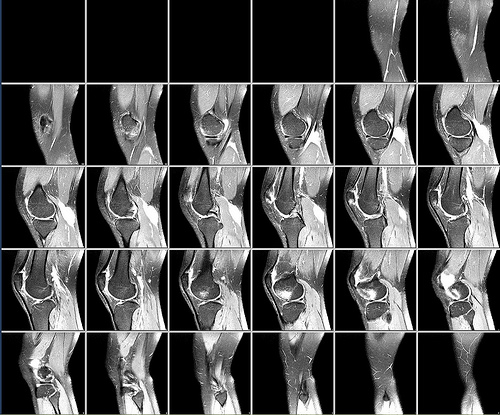 MRI images can be hard to interpret, especially the meaning of different findings. The image is CC by Becky Stern

In my daily clinical work I’m often confronted with long descriptions of MRI exams by radiologists, and frequently my final conclusion is: nothing out of the ordinary. It is therefore nice to see articles from Felson’s team, where they try to shed some light onto the issue.

Englund et al showed previously that an ostearthritic knee early on has degenerative meniscal changes, and the MRI-findings of these often cause distress among both GP:s and patients. Guermanzi et al’s study goes even further, and examines knees without osteoarthritis (Kjellgren-Lawrence 0) to see what an MRI can say about a painful knee in patients above 50 years of age.

They examined 993 participants that had to report if they’ve had any knee pain and fill in a WOMAC form. They selected these by random digit dialing a little more than 2500  patients from Framingham, they excluded patients with contraindications to MRI, bilateral knee arthroplasties, rheumatoid arthritis, cognitive impairment or terminal cancer.

The MRI was a 1.5 Tesla machine and the findings they looked for were:

Even though they found that pain and findings correlated the relation was very weak. Almost 90 % of patients without any knee pain showed MRI-abnormalities. Most frequent abnormalities were osteophytes, cartilage changes and bone marrow lesions with a prevalence of more than 50 %. Meniscal lesions were present in 20-25 % of the patients, it was even less frequent in those patients with pain. This is consistent with previous findings by Englund et al in 2008.

It is surprising that in this group of rather knee-healthy subject 1/3 reported some kind of knee pain. This could be in part due to that patients with symptoms probably are more willing to participate than those that aren’t.

The study protocol mentions a non-willingness to participate in 1/3 of the cases and if you look at the methods section it is clear that less than 1/2 of the called patients ended up in the study. A possible bias for the study is that those with previous knee injuries will participate in a higher degree even if they’re asymptomatic.

This cross-sectional study is interesting, although it would be great to see some longitudinal follow-up of these subjects. Some of the questions that could be of interest: